Why France is Playing 'Stupid' on Iran (Asia Times)

It certainly helped that, according to The Times of Israel, French parliament member Meyer Habib - also a holder of an Israeli passport, a former official Likud spokesperson in France, and a close pal of Bibi's - called French Foreign Minister Laurent Fabius to tell him Israel would attack Iranian nuclear installations if the current deal on the table was clinched. [3]

Call it the AIPAC effect. Habib is the vice-president of the Conseil Representatif des Institutions juives de France, or CRIF - the French equivalent to the American Israel Public Affairs Committee. The ghostwriter of President Hollande's speeches also happens to be a member of CRIF.

Fabius, grandiloquent and as slippery as runny Roquefort, invoked - what else - "security concerns of Israel" to derail Geneva. Iranian President Hassan Rouhani and Foreign Minister Mohammed Javed Zarif were always extremely worried about being sabotaged by their own internal opposition, the hard line Islamic Revolutionary Guards Corps. So their number one directive was that no details of the deal should be leaked during the negotiations.

That's exactly what Fabius did. Even before Kerry landed in Geneva, Fabius was telling a French radio station that Paris would not accept a jeu des dupes ("fools' game").

The role of Fabius was pricelessly summed up by the proverbial unnamed Western diplomat telling Reuters, "The Americans, the EU and the Iranians have been working intensively for months on this proposal, and this is nothing more than an attempt by Fabius to insert himself into relevance late in the negotiations." [4]

Terabytes of spin have been asserting that Washington and Paris are playing good cop-bad cop on the Iranian dossier. Not exactly; it's more like the Gallic rooster once again showing off.

Hollande was gung-ho on bombing Damascus when Obama backed off at the 11th minute from the Pentagon's "limited" attack; Hollande was left staring at a stale bottle of Moet. On both Syria and Lebanon, Paris is unabashedly playing a mix of neocolonial hugs and kisses while sharing the bed with Israel and the House of Saud.

But why, once again, shoot itself in the foot? Paris has lost a lot of money - not to mention French jobs, via automaker Peugeot - because of the Iran sanctions dementia.

Ah, but there is always the seduction of Saudi Arabia's intelligence chief Prince Bandar bin Sultan, aka Bandar Bush, and the Gulf petro-monarchies. In a nutshell; Bandar Fabius was nothing but playing paperboy for the House of Saud. The prize: huge military contracts - aircraft, warships, missile systems - and possible construction of nuclear power plants in Saudi Arabia, a deal similar to the one energy giant French Areva clinched last year with the United Arab Emirates (UAE).

The ghost of Montaigne must be squirming; France does not do irony anymore. Iran has no right to have its own nuclear plants, but France builds them and operates them for its Wahhabi clients.

The West doing Israel's bidding makes sense; after all Israel may also be interpreted as a Western aircraft carrier in the heart of the Arab Middle East. As for France doing the Wahhabis' bidding, just follow the money - from Veolia building and operating water desalination plants in Saudi Arabia to all those Rafale fighter jets to be unloaded.

Qatar, that slavery paradise presented by FIFA with a World Cup, has already invested over US$15 billion - and counting - in France, from shares in Veolia and energy behemoth Total to construction firm Vinci, media giant Lagardere, and full control of Paris Saint Germain, home of the new King of Paris, football icon Zlatan "Ibracadabra" Ibrahimovic. Not to mention that Qatar has bought virtually every significant square inch between Madeleine and Opera in Paris.

Hollande is a joke. This week he's on the cover of the Courrier International weekly (headline: "The Art of the Fall"), with pan-European media judging him "incoherent", "paralyzed" and "incompetent" (and these are the merciful epithets). On the weekend edition of the establishment Le Figaro daily, he was being destroyed because of France's (latest) credit rating downgrade by Standard & Poor's.

King Sarko The First - aka former president Nicolas Sarkozy - must be beaming; Hollande is now the most unpopular president in French history. Paris remains great - but mostly for hordes of fleeting tourists from emerging markets, not for hordes of unemployed Parisians.

So it's Bandar Fabius to the rescue! Gulf petro-monarchy cash is the salvation. In thesis, this show of "independence" should translate into billions of euros in contracts and investments. It also helps that "incompetent" Hollande is on an official visit to Israel in the next few days.

That pivot to Persia
Forget about finding details of the real reasons for this "show of independence" in French mainstream media, apart from Le Monde Diplomatique's Alain Gresh in his blog. [5]

Explanations are absolutely pathetic. France is "alone against all"; it has shown "responsibility"; it has "reaffirmed its independence". And of course all the blame lies on Kerry, who allegedly "came up with a text that nobody ever saw before". Every shill has scrambled to cast Israeli-firster Fabius as savior. And yet the Elysee Palace has stressed that Fabius was just following Hollande's orders - which, in thesis, meant renegotiating the "weak points" of the deal. Call it, essentially, "incompetent" Hollande showing Obama he's got balls.

Paris has spun that the problems with the deal concern Tehran's heavy-water reactor in Arak and its stock of medium-enriched uranium. US and Iranian diplomats had been working hard towards a compromise; Tehran would keep building the reactor over the six-month period of the interim agreement, but tests would be with dummy fuel rods and ordinary water.

Kerry was working on it until Fabius unleashed his peacock act in a long session that only finished late into Saturday morning. This led Iranian Foreign Minister Zarif to note, wryly, that the P5+1 (the United States, Britain, France, Russia and China plus Germany) needed to negotiate with each other before negotiating with Iran.

The P5+1 internal mess could seriously compromise the next round of negotiations next week in Geneva. Yet Kerry, if he noticed it, managed to change his narrative to something even more theater of the absurd; he's now blaming Iran for the non-deal. [6] It's as if, after reading the French papers, he decided to atone for his sins.

Arguably Iran has proved to the whole, real, flesh and blood "international community" that it wants a deal and it is willing to negotiate. But then there are the sanctions to be approved by the US Congress - a de facto internal American sabotage. Yet these are third-party sanctions - where other countries are "punished" by the US for trading with Iran. No one will take these seriously, starting with the Asian powers, Turkey and Russia.

For the moment, no deal may seem better than a bad deal. It might happen at the next meeting, in Geneva on November 22. Most likely, a full interim deal will happen in a few months. The Obama administration wants a deal. France, for all its posture, is irrelevant.

Worse. Paris is being "blind" and "stupid" - to adapt Kerry's words - by alienating French companies, in the energy sector, nuclear energy and manufacturing, from the fabulous possibilities unleashed by a normalized relationship between Iran and the West. If the Hollande gang believes they will be "saved" by the Wahhabis, they must be on mescal.

It may take years - and it will. But Washington will inevitably find some sort of accommodation with Iran. US corporations want it. The energy-starved West wants it. Even the US hyperpower complex wants it - as it will give it way more leeway in Southwest Asia and beyond. The axis of fear and loathing of Israel, the House of Saud and France may play spoilers - but not for long. "Pivot to Asia"? Not before a pivot to Persia.

He may be reached at pepeasia@yahoo.com. 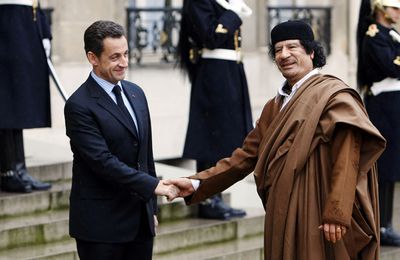