The French political establishment is applauding the ouster on Saturday of Ukrainian President Viktor Yanukovych, in a coup by the Western-backed opposition led by fascist groups that glorify the crimes of the Nazis.

Having witnessed the bloody, Western-backed fascist riots in Kiev last week and worked closely with the opposition as it extra-legally toppled Yanukovych, Fabius hypocritically declared: “We would like to see the respect of the constitution, the formation of a new government, and the holding of elections as soon as possible.”

The embrace of fascist forces in Ukraine exposes the political criminality of France’s ruling Socialist Party (PS) and of the entire French political establishment. Along with Berlin and Washington, Paris backed far-right opposition forces like the neo-Nazi Right Sector and Oleh Tyahnybok’s fascist Svoboda party. Svoboda, which is affiliated to France’s neo-fascist National Front (FN), celebrates Nazi SS units that massacred Jews in the western Ukrainian region of Galicia during World War II.

Paris collaborated with Berlin to pressure Yanukovych to accept opposition demands. On Wednesday, as German and French cabinet ministers met at the Elysée presidential palace in Paris for the 16th French-German Ministers Council, they discussed imposing sanctions on Ukraine.

“We condemn acts of violence and repression from those in power and our first call is that it stops. But those who have committed such acts and are preparing to do so again need to know they will be punished,” President François Hollande said.

On Friday, Hollande laid all blame for the violence on Yanukovych, exonerating the PS’ fascist proxies in Kiev. He said, “We must end the violence, for which the government is responsible, and give a voice to the Ukrainian people.”

The PS’ collaboration with Ukrainian fascist groups affiliated to France’s FN underscores the hypocrisy of its claims to be waging a struggle against the rise of the FN inside France itself. In fact, the PS easily works with fascist groups because the main points of its reactionary political agenda, consisting of deep austerity measures and escalating wars and imperialist interventions, are entirely compatible with far-right politics.

If the FN is rising, in fact, it is largely because of the right-wing policies of the PS and the pseudo-left parties, who have suppressed opposition to social austerity measures and allowed the FN to posture as the sole party opposed to the political establishment in France.

Significantly, though the ouster of Yanukovych represents a short-term victory for Svoboda, which is affiliated to the FN inside the European Alliance of National Movements (EANM), the FN has refrained from praising its Ukrainian allies.

On Thursday, FN Vice-President and Interior Ministry official Florian Philippot called on the EU not to intervene in Ukraine. He said, “We must avoid intervention by the European Union, which until now has only poured fuel on the fire by making completely irresponsible promises to Ukraine. We did not need to propose that Ukraine associate itself to or even become a member or affiliated party of the EU.”

Philippot criticized the EU intervention in Ukraine: “It is not up to the EU to find an exit from the crisis, it made ill-considered promises, it is threatening sanctions, which is idiotic.”

“The most intelligent solution is to move rapidly towards new elections,” he said, adding that “this is for Ukrainians to decide.”

One major factor in the FN’s decision to keep a relatively low profile and adopt a cautious stance on France’s Ukrainian intervention is that its affiliation with Svoboda cuts across current FN leader Marine Le Pen’s attempts to “de-demonize” the party.

Since she took over leadership of the FN from her father Jean-Marie, Marine Le Pen has tried to distance the FN from its historically anti-Semitic, free-market, and pro-Nazi positions. She considers this essential to the FN’s ability to win a broader electoral base inside France.

Jean-Marie Le Pen infamously dismissed the Holocaust as a “detail of history” and the Nazi occupation of France as “not especially inhumane, even if there were a number of excesses, which are inevitable in a country of 550,000 square kilometres.”

In contrast, last October, Marine Le Pen claimed that the FN is “neither left wing nor right wing,” but had radically different ideas from the mainstream parties such as the right-wing Union for a Popular Movement (UMP) and the ruling PS.

Marine Le Pen’s campaign to “de-demonize” the FN has had some success, as the entire French political elite is hurtling so quickly to the right that no political party there has sought to expose the historical lies underlying the FN’s attempts to “de-demonize” itself.

The ties of the FN and of France’s bourgeois “left” to the openly pro-Nazi Ukrainian far right underscore not only the profound links between the FN’s politics today and its openly fascist past, but the accelerating slide of the entire French ruling elite towards fascistic politics. 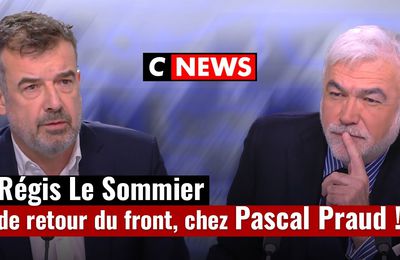