Israel is facing a backlash in America (The Daily Star)

Consider two incidents that occurred in the past few days in the United States and you should start to grasp the elements of a slow, subtle but steady and important shift that is taking place in the country.

It is happening in that arena where pro-Israeli and pro-Palestinian sentiments are being expressed in public and seek to influence American government policy, media and even the decisions of churches and non-government organizations such as student and professional groups.

In Las Vegas, three likely Republican presidential candidates addressed the Republican Jewish Coalition, basically a bank account for wildly pro-Israel candidates run by the casino magnate Sheldon Adelson. They leaped, howled and virtually stripped naked in proclaiming their endless love for Israel and Zionism, hoping to get hundreds of millions of dollars that Adelson will offer Republicans who are sufficiently pro-Israeli and might have a chance at winning the presidency.

Among these candidates are Governor John Kasich of Ohio, Governor Scott Walker of Wisconsin and Governor Chris Christie of New Jersey. Christie apparently went for the Buffoon of the Year Award. After he had accurately referred to the Palestinian West Bank as the “occupied territories,” he apologized in person to Adelson the next day for using this expression. Rabid Zionists prefer to call the West Bank part of the historic land of Israel, or, at best, a “disputed” territory.

This is a routine spectacle in the United States, and it has been going on for decades. It spikes to new levels of shameful political pandering when national elections approach. Yet powerful pro-Zionist groups and individuals that have traditionally shaped much of the discussion and official American policy on Palestine and Israel are suddenly finding themselves increasingly challenged in public. Consequently, their influence is slowly being reduced to a shrinking body of Americans that is primarily composed of politicians in Washington, who are most susceptible to the pressures that extremist Zionists can exert, and who are also most in need of funds to run their campaigns.

At the same time as this was going on, a group called Students for Justice in Palestine followed the established procedures and received permission to hang a banner at the entrance to Columbia University’s Barnard College in New York City, calling for justice in Palestine. The next day, after protests by pro- Israel groups, the university president ordered the banner taken down. In the past, the story would have ended there. This time, however, it did not, because Students for Justice in Palestine activists followed up with a campaign of articles in the local media, and they continue using social media to challenge what they saw as the pro- Israel bias of the administration.

Similar situations are taking place routinely across many American universities, or in professional and academic societies, mainstream churches and other groups that are no longer remaining silent in the face of Israel’s continued colonization, subjugation and mistreatment of the Palestinian people and their land. Another example is the call this week by mainstream American civil liberties groups to oppose a proposed law by a pro- Israel Illinois state lawmaker calling on all university administrators to condemn the use of all academic boycotts – presumably because some American academics have called for boycotting Israeli universities.

This new tendency to stand up to pro- Israel fanatics in the U.S. reflects expanding global moves by governments, labor unions and others to boycott Israeli government or private institutions colonizing and exploiting Palestinian lands and communities. For the first time on a large scale, it is now more acceptable in mainstream American society to discuss Israeli behavior in public, assess whether Israel is acting justly or criminally and propose measures to force Israeli compliance with the rule of law and ethical international norms of behavior.

The simple but historic message I read in this trend is that traditional Zionist intimidation tactics are losing some of their effectiveness – other than against American presidential candidates, who will remain fully compliant with Zionist demands. Pro-Zionist fanatics (both Jews and Christians) are concerned because grass-roots activists are openly challenging them and, more importantly, organizing activities that include boycotts, advocacy for divestments and sanctions and public gestures as simple as planting posters or hanging banners that counter the Zionist extremists.

The activists for Palestinian justice and against Zionist criminality include a sprinkling of Palestinian-Americans and other Arab-Americans. But more importantly, they also include people from other ethnic backgrounds, such as white Anglo-Saxons as well progressive Jewish-Americans.

All of them feel they should stop being silent in the face of Israeli excesses and unethical behavior and take action to promote genuine peace and justice among Israelis and Palestinians.

Rami G. Khouri is published twice weekly by THE DAILY STAR. He can be followed on Twitter @RamiKhouri. 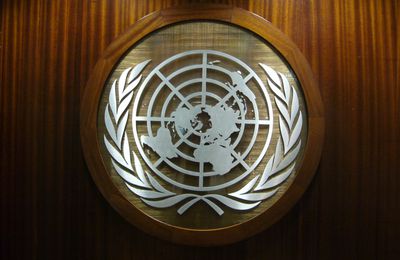