Disgusted, Russia Officially Gives Up Any Pretense of "Dialog" With the AngloZionist Empire (The Saker)

The full address of President Putin to the Federal Assembly is now available online and, since this is a very long text, I will no re-post it here. What I propose to do here is to bring to your attention four verbatim excerpts from his speech with some key segments bolded out.

Most of the speech was on economic and internal matters, but I think that these four points and, especially, the expressions chosen by Putin really "tell the story" of what the Kremlin's position vis-à-vis the West is nowadays. See for yourself:

It was an event of special significance for the country and the people, because Crimea is where our people live, and the peninsula is of strategic importance for Russia as the spiritual source of the development of a multifaceted but solid Russian nation and a centralised Russian state. It was in Crimea, in the ancient city of Chersonesus or Korsun, as ancient Russian chroniclers called it, that Grand Prince Vladimir was baptised before bringing Christianity to Rus.

In addition to ethnic similarity, a common language, common elements of their material culture, a common territory, even though its borders were not marked then, and a nascent common economy and government, Christianity was a powerful spiritual unifying force that helped involve various tribes and tribal unions of the vast Eastern Slavic world in the creation of a Russian nation and Russian state. It was thanks to this spiritual unity that our forefathers for the first time and forevermore saw themselves as a united nation. All of this allows us to say that Crimea, the ancient Korsun or Chersonesus, and Sevastopol have invaluable civilisational and even sacral importance for Russia, like the Temple Mount in Jerusalem for the followers of Islam and Judaism. And this is how we will always consider it.

By the way, Russia has already made a major contribution to helping Ukraine. Let me reiterate that Russian banks already invested some $25 billion in Ukraine. Last year, Russia’s Finance Ministry extended a loan worth another $3 billion. Gazprom provided another $5.5 billion to Ukraine and even offered a discount that no one promised, requiring the country to pay $4.5 billion. Add it all up and you get as much as $ 32.5-33.5 billion that were provided only recently.

Of course, we have the right to ask questions. What was this Ukrainian tragedy for? Wasn’t it possible to settle all the issues, even disputed issues, through dialogue, within a legal framework and legitimately? But now we are being told that this was actually competent, balanced politics that we should comply with unquestionably and blindfolded.

This will never happen. If for some European countries national pride is a long-forgotten concept and sovereignty is too much of a luxury, true sovereignty for Russia is absolutely necessary for survival.

3) The Empire was Russia's mortal enemy long before Crimea

We remember well how and who, almost openly, supported separatism back then and even outright terrorism in Russia, referred to murderers, whose hands were stained with blood, none other than rebels and organised high-level receptions for them. These “rebels” showed up in Chechnya again. I'm sure the local guys, the local law enforcement authorities, will take proper care of them. They are now working to eliminate another terrorist raid. Let’s support them.

Let me reiterate, we remember high-level receptions for terrorists dubbed as fighters for freedom and democracy. Back then, we realised that the more ground we give and the more excuses we make, the more our opponents become brazen and the more cynical and aggressive their demeanor becomes.

Despite our unprecedented openness back then and our willingness to cooperate in all, even the most sensitive issues, despite the fact that we considered – and all of you are aware of this and remember it – our former adversaries as close friends and even allies, the support for separatism in Russia from across the pond, including information, political and financial support and support provided by the special services – was absolutely obvious and left no doubt that they would gladly let Russia follow the Yugoslav scenario of disintegration and dismemberment. With all the tragic fallout for the people of Russia.

It didn’t work. We didn’t allow that to happen.

Just as it did not work for Hitler with his people-hating ideas, who set out to destroy Russia and push us back beyond the Urals. Everyone should remember how it ended.

4) Russia will not be bullied

No one will ever attain military superiority over Russia. We have a modern and combat ready army. As they now put it, a polite, but formidable army. We have the strength, will and courage to protect our freedom.

We will protect the diversity of the world. We will tell the truth to people abroad, so that everyone can see the real and not distorted and false image of Russia. We will actively promote business and humanitarian relations, as well as scientific, education and cultural relations. We will do this even if some governments attempt to create a new iron curtain around Russia.

We will never enter the path of self-isolation, xenophobia, suspicion and the search for enemies. All this is evidence of weakness, while we are strong and confident.

In my opinion what we are seeing a a big "coming out". For a variety of reasons, Putin and Foreign Minister Lavrov chose not to say this kind of things in the past, but for several months already we have seen a sense of utter disgust manifest itself more and more openly from the Russian. Today, it finally truly came out in the open.

Unlike the Americans, Russians always talk to their enemies and some form of "talking" with the West will continue. But it is rather obvious that the Kremlin has given up any hope of achieving anything through any kind of dialog. From now on, Russia will mostly rely on unilateral actions. And since Russians never threaten, these actions will always come as a shock and a surprise to the Western plutocracies.

I have said this many times: the AngloZionist Empire has launched a real war against Russia, one in which military forces are less important than the informational war, but a real war nonetheless. What the Empire probably did not realize, is that this would not be a short war, but a long one. And while the Empire has already used most of its weapons, the Russians have just begun their defensive operations. This will be a long war and it will only end when one of the two sides basically breaks down and collapses.

On March 1st of this year I wrote a piece entitled "Obama just made things much, much worse in the Ukraine - now Russia is ready for war". Russia did not want that war, it was imposed on her at a time when Russia was not ready. Nevertheless, today Putin informed us all that Russia refuses to submit, that she accepts the challenge and that she will prevail. 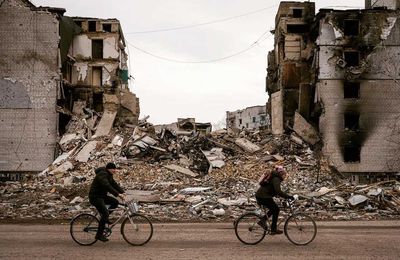