The Untold Story of the Maidan Massacre (BBC)

A day of bloodshed on Kiev's main square, nearly a year ago, marked the end of a winter of protest against the government of president Viktor Yanukovych, who soon afterwards fled the country. More than 50 protesters and three policemen died. But how did the shooting begin? Protest organisers have always denied any involvement - but one man told the BBC a different story. 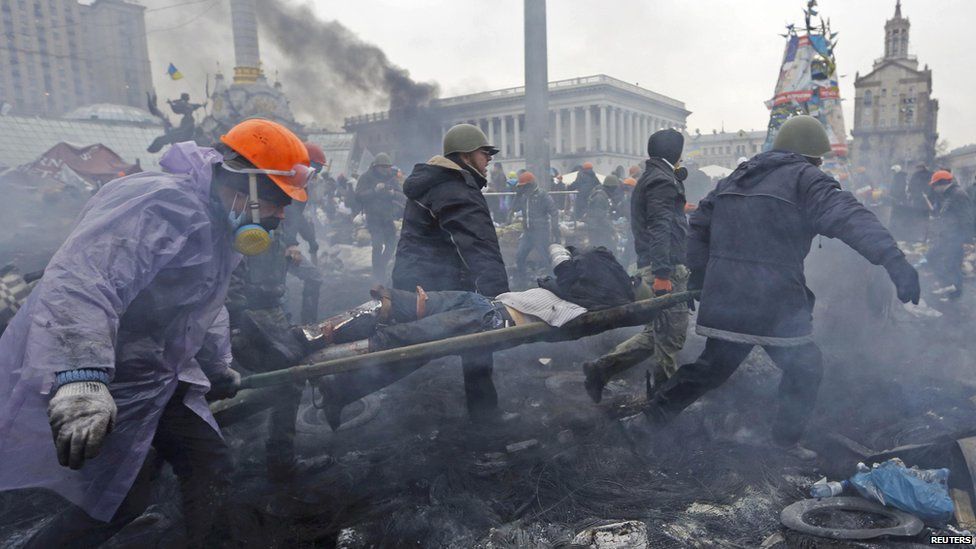 t's early in the morning, 20 February, 2014. Kiev's Maidan square is divided - on one side the riot police, the protesters on the other.

This has been going on for more than two months now. But events are about to come to a head. By the end of the day, more than 50 people will be dead, many of them gunned down in the street by security forces.

The violence will lead to the downfall of Ukraine's pro-Russian president, Viktor Yanukovych. Moscow will call 20 February an armed coup, and use it to justify the annexation of Crimea and support for separatists in Eastern Ukraine.

The protest leaders, some of whom now hold positions of power in the new Ukraine, insist full responsibility for the shootings lies with the security forces, acting on behalf of the previous government.

But one year on, some witnesses are beginning to paint a different picture.

"I didn't shoot to kill"

"I was shooting downwards at their feet," says a man we will call Sergei, who tells me he took up position in the Kiev Conservatory, a music academy on the south-west corner of the square.

"Of course, I could have hit them in the arm or anywhere. But I didn't shoot to kill."

Sergei says he had been a regular protester on the Maidan for more than a month, and that his shots at police on the square and on the roof of an underground shopping mall, caused them to retreat.

There had been shooting two days earlier, on 18 February. The 19th, a Wednesday, had been quieter, but in the evening, Sergei says, he was put in contact with a man who offered him two guns: one a 12-gauge shotgun, the other a hunting rifle, a Saiga that fired high-velocity rounds.

He chose the latter, he says, and stashed it in the Post Office building, a few yards from the Conservatory. Both buildings were under the control of the protesters. Under attack, the police retreated from their position near the front line in the square, falling back along the street on the north side of Hotel Ukraine.

Protesters then advanced towards the police, where they were shot by retreating security forces and snipers from surrounding buildings.

More than 50 people were killed, the heaviest death toll of the clashes between protesters and security forces in the Maidan.

When the shooting started early on the morning of the 20th, Sergei says, he was escorted to the Conservatory, and spent some 20 minutes before 07:00 firing on police, alongside a second gunman.

His account is partially corroborated by other witnesses. That morning, Andriy Shevchenko, then an opposition MP and part of the Maidan movement, had received a phone call from the head of the riot police on the square.

"He calls me and says, 'Andriy, somebody is shooting at my guys.' And he said that the shooting was from the Conservatory."

Shevchenko contacted the man in charge of security for the protesters, Andriy Parubiy, known as the Commandant of the Maidan.

"I sent a group of my best men to go through the entire Conservatory building and determine whether there were any firing positions," Parubiy says.

Andriy Parubiy, now deputy speaker of the Ukrainian parliament, says his men found no gunmen in the Conservatory building.

But a photographer who gained access to the Conservatory later in the morning - shortly after 08:00 - took pictures there of men with guns, although he did not see them fire.

What happened in Maidan Square: A photographer's story "I was just reloading," he told me. "They ran up to me and one put his foot on top of me, and said, 'They want a word with you, everything is OK, but stop doing what you're doing.'"

Sergei says he is convinced the men who dragged him away were from Parubiy's security unit, though he didn't recognise their faces. He was escorted out of the Conservatory building, taken out of Kiev by car, and left to make his own way home.

By that time three policemen had been fatally wounded and the mass killings of protesters had begun.

Kiev's official investigation has focused on what happened afterwards - after the riot police began to retreat from the square. In video footage, they are clearly seen firing towards protesters as they pull back.

Only three people have been arrested, all of them members of a special unit of riot police. And of these three, only two - the lower-ranking officers - remain in custody. The unit's commanding officer, Dmitry Sadovnik, was granted bail and has now disappeared.

Some of the dead were almost certainly shot by snipers, who seemed to be shooting from some of the taller buildings surrounding the square.

Lawyers for the victims and sources in the general prosecutor's office have told the BBC that when it comes to investigating deaths that could not have been caused by the riot police, they have found their efforts blocked by the courts.

"If you think of Yanukovych's time, it was like a Bermuda triangle: the prosecutor's office, the police and the courts," says Andriy Shevchenko. "Everyone knew that they co-operated, they covered each other and that was the basis of the massive corruption in the country. Those connections still exists."

Ukraine's Prosecutor General, Vitaly Yarema, was dismissed this week, amid harsh criticism of his handling of the investigation.

"I'm certain that the shootings of the 20th were carried out by snipers who arrived from Russia and who were controlled by Russia," says Andriy Parubiy, the former Commandant of the Maidan.

"The shooters were aiming to orchestrate a bloodbath on Maidan."

This is a widely-held belief in Ukraine. In Russia, many believe the opposite - that the revolt on Maidan was a Western conspiracy, a CIA-inspired coup designed to pull Ukraine out of Moscow's orbit. Neither side offers convincing evidence for its assertion.

The overwhelming majority of the protesters on Maidan were peaceful, unarmed citizens, who braved months of bitter cold to demand a change to their corrupt government. As far as is known, all the protesters killed on 20 February were unarmed.

The leaders of the Maidan have always maintained they did their best to keep guns away from the square.

"We knew that our strength was not to use force, and our weakness would be if we start shooting," says Andriy Shevchenko.

Parubiy says it is possible that a handful of protesters with weapons may have come to the Maidan as part of a spontaneous, unorganised response to violence from the security forces in the days running up to 20 February.

"I did hear that, after the shootings on 18 February, there were guys who came to Maidan with hunting rifles. I was told that sometimes they were the relatives or parents of those people who were killed on the 18th. So I concede that it's possible there were people with hunting rifles on Maidan. When the snipers began to kill our guys, one after another, I can imagine that those with the hunting rifles returned fire."

I have nothing to be proud of. It’s easy to shoot. Living afterwards, that’s the hard thing. But you have to protect your country.

Sergei, one of the Conservatory gunmen who spoke to the BBC on the condition of anonymity -

Sergei, again, tells a different story. He says he was recruited as a potential shooter in late-January, by a man he describes only as a retired military officer. Sergei himself was a former soldier.

"We got chatting, and he took me under his wing. He saw something in me that he liked. Officers are like psychologists, they can see who is capable. He kept me close."

The former officer dissuaded him from joining any of the more militant groups active on the Maidan.

Was he being prepared, psychologically, to take up arms?

"Not that we sat down and worked out a plan. But we talked about it privately and he prepared me for it."

It is not clear who the man who apparently recruited Sergei was, or whether he belonged to any of the recognised groups active on the Maidan.

And there is much else that we still do not know, such as who fired the first shots on 20 February.

As for conspiracy theories, it is possible that Sergei was manipulated, played like a pawn in a bigger game. But that is not the way he sees it. He was a simple protester, he says, who took up arms in self-defence.

"I didn't want to shoot anyone or kill anyone. But that was the situation. I don't feel like some kind of hero. The opposite: I have trouble sleeping, bad premonitions. I'm trying to control myself. But I just get nervous all the time. I have nothing to be proud of. It's easy to shoot. Living afterwards, that's the hard thing. But you have to defend your country."

You can watch a longer video report by Gabriel Gatehouse here and listen to a radio documentary here.