Xenophobia: South Africa is Disgracing Itself and Its Friends (Pambazuka News)

Attacks against resident non-South African Blacks are particularly disturbing, given the great assistance poor Black nations gave to South Africans during their struggle against white rule. One wonders if African “outsiders” are being “used by politicians who have become unpopular due to their lack of performance, to distract attention from problems such as massive unemployment and lack of housing in the townships?

“Classifying African ‘immigrants’ as drug dealers and organizers of prostitution is a wicked ploy.

Does the ANC leadership, many of whose members lived in exile in other African countries for many years, bother to tell their stories to the new generation that is growing up in South Africa and who know almost nothing about the role played in the struggle against apartheid by the poor African countries whose people constitute the “immigrants” they now despise and harass?

A metaphor used to describe disappointment portrays the act whereby one's teeth miss something one wanted to chew and bite into each other instead.

Depending on the amount of energy put into the act of chewing, this can result in a very painful “tooth-self-bite” or one tooth unintentionally biting another tooth. The pain results as much from sheer shock act as the act of biting itself.

The Twi expression for this unusual pain consists of just two words – mese afem. Although few in number, they're heavily loaded words. For in addition to the literal meaning of biting one's own teeth, they have a figurative meaning. They convey this idea: “I'd hoped to encounter something palatable when I began this process, but instead, I've been jolted by an unexpected pain, akin to tooth-ache -- and you know what that's like!”

Frankly, that's just how I feel whenever I hear that mobs in South Africa have attacked and killed or injured people from other African countries and vandalized their shops and homes.

“De Klerk made sure that the white minority would continue to retain the economic power which it had used political power to capture.”

For some of us have always idealized the situation in South Africa. First, we looked upon it as a land in which people of different colors were contesting for power. Whites were largely against, and victimized “Blacks” and “Coloreds.” The other races, in their turn, hated the baaskap Whites.

Thankfully, in 1989, the situation in South Africa began to unravel. The white minority was persuaded by a man called F. W de Klerk to give up political power. But de Klerk was very clever in arranging the transfer of power. He made sure that the white minority would continue to retain the economic power which it had used political power to capture, since the election to power of the National Party [Boers] in 1948.

In celebrating the achievement of what was, essentially only “half-power,” we were wrong. For, we were being trapped into thinking in terms of groups. The blacks had such an advantage in numbers that we assumed they would use political power to wrest economic power from the hands of the whites. It didn't work like that, for, of course, there are blacks who are capitalist-minded as the selfish whites.

So, white economic power identified, wooed and allied itself to some of the more corruptible elements in the black majority. People were offered board membership in white-owned companies, with all the privileges ancillary to membership of the business oligarchy. In turn, business power infiltrated national and regional politics. Through what was called black economic empowerment, business was given a legitimate means to break the claws of the political power exercised by the black majority.

“White economic power identified, wooed and allied itself to some of the more corruptible elements in the black majority.”

For instance, the leader of the National Union of Mineworkers, the once-militant trade unionist, Mr. Cyril Ramaphosa, was enticed away from his championship of the rights of the poorly-paid black miners onto the board of Lonrho, one of the most notorious beneficiaries of apartheid-style wage differentiation between white and black miners. When trouble broke out in 2012 at Marikana, a mine owned by Lonrho, it was [the now] “Big Boss” Ramaphosa who was sent out to defuse it. His reputation took a severe knock from that terrible crisis (it resulted in a great loss of life, 34 deaths) that may well put paid to his ambition to replace President Jacob Zuma at the head of the African National Congress (ANC) when the next general election is held in 2019.

Yes, it is not always sensible to assume that the populace of countries are necessarily made up of lumpen groups when it comes to politics. Individuals often act to achieve their own selfish ends and are impelled to action by their own impulses, even within the most solid-looking organizations. And that's why I counsel myself not to jump to too many conclusions when I read things like the following:

"South African police have used stun grenades, rubber bullets and water cannon to try to disperse anti-immigration protesters in the capital, Pretoria, and keep them from foreign nationals who had gathered to express alarm about recent attacks.

"Resentment against foreign nationals has sometimes turned deadly amid accusations that they take jobs from locals in a country where unemployment is more than 25%.....

"In 2015, anti-immigrant riots in and around the city of Durban left at least six people dead. About 60 people were killed in similar violence seven years earlier. [In the latest outbreak of violence]… Protesters in Pretoria marched towards the foreign ministry, some carrying sticks or pipes. A petition was handed to the ministry in which they suggested the government teach immigrants to ‘speak properly.’ The petition added: ‘They are arrogant and they don’t know how to talk to people, especially [the] Nigerians.’

"The Nelson Mandela Foundation criticized [the South African] authorities for ‘giving permission for a march of hatred.’

“Who organized the attacks?”

"A statement issued by President Jacob Zuma’s office said South Africans should not blame all crime on foreign nationals. It cited recent reports of violence in Pretoria and hate speech on social media. ‘Many citizens of other countries living in South Africa are law abiding and contribute to the economy of the country positively,’ Zuma said. ‘It is wrong to brandish all non-nationals as drug dealers or human traffickers.’

"[But] Amnesty International accused the [South African] authorities of failing to ‘address toxic populist rhetoric that blames and scapegoats refugees and migrants.’

"Zuma [claimed that] South Africans were not xenophobic, and he called on everyone, citizens and non-citizens [alike], to work together to combat the high crime rate.

"The periodic backlash against foreign nationals has hurt the tolerant image the country has tried to present since the end of apartheid almost a quarter of a century ago." (London Guardian)

The questions I ask are: Who organized the attacks? Are the mobs on a crusade against drugs and alleged prostitution whipped up by religious fanatics? Or are they being used by politicians who have become unpopular due to their lack of performance, to distract attention from problems such as massive unemployment and lack of housing in the townships, and focus attention on “immigrants” instead?

Whatever the cause(s) of the attacks, the duty of the South African Government is clear: please take the trouble to educate your citizens well about other African countries. For years, the Ghanaian government under our President Dr. Kwame Nkrumah housed and fed hundreds of South African refugees in flats and hostels at what is now the Airport Residential Area in Accra. One of my friends, Edwin Duplan, was at one time the director of the establishment that looked after the refugees. Meanwhile, Nkrumah's Bureau of African Affairs provided political and military training to those South Africans who applied for such training. They lacked for nothing.

“For years, the Ghanaian government housed and fed hundreds of South African refugees in flats and hostels in Accra.”

Nigeria also did its bit. At one stage, Thabo Mbeki, who was to become President of South Africa after the retirement of Nelson Mandela, was a guest in Nigeria. (See his speech on xenophobia.)

Once, whilst I was visiting Nigeria, I was surprised to be invited to a meeting of the Nigeria Anti-Apartheid Committee that was organized by my friend Sam Ikoku (a former Nigerian exile in Ghana). Sam Ikoku announced at the meeting that Nigeria's [then] richest man, Chief M K O Abiola, had donated the equivalent of $1 million to the cause of looking after South African exiles in Nigeria.

I have seen Mozambicans and Angolans too doing their best for South Africans, even when they themselves were indigent. Ditto for Zimbabweans. I have also personally visited South African exile camps in Zambia. (One of these was full of recruits brought into Zambia by a rather dodgy freedom fighters’ organisation called the Unity Movement of South Africa (UMSA), led by a man called I.B Tabata. The Zambians did their best to assist them, though they knew that not all of them were serious freedom fighters.

Does the ANC leadership, many of whose members lived in exile in other African countries for many years, bother to tell their stories to the new generation that is growing up in South Africa and who know almost nothing about the role played in the struggle against apartheid by the poor African countries whose people constitute the “immigrants” they now despise and harass periodically?

“I have personally visited South African exile camps in Zambia.”

Does the South African Department of Home Affairs explain to the people of South Africa how stringent are the conditions that people from other African countries are already made to fulfill before they are granted visas to enter South Africa and to remain resident there?

No -- South Africans mustn't do this to Africa. There is a saying in Ghana that, “If you won't praise me, at least do not defame me!" Classifying African “immigrants” as drug dealers and organizers of prostitution is a wicked ploy. If there are criminals, they should be reported to the police and dealt with as any other criminals. Venting the anger and frustration that incompetent, or corrupt, or mediocre politicians have aroused, upon hapless “immigrants”, is a manifestation of hatred and xenophobia pure and simple.

And it doesn't befit the image of the South Africa many of us thought we were helping to create.

Cameron Duodu is a veteran Ghanaian journalist and author. 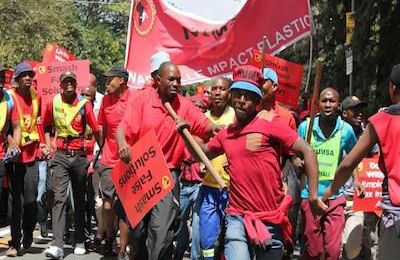