The Trump administration officials dismissed the Russian claim that the Syrian airstrike had targeted a munitions warehouse controlled by Islamic extremists as an afterthought to cover up the Syrian government's culpability for the chemical attack. Moreover, the Trump officials claimed that US intelligence had located the site where the Syrian regime had dropped the chemical weapon.

However, two new revelations contradict the Trump administration's line on the April 4 attack. A former US official knowledgeable about the episode told Truthout that the Russians had actually informed their US counterparts in Syria of the Syrian military's plan to strike the warehouse in Khan Sheikhoun 24 hours before the strike. And a leading analyst on military technology, Dr. Theodore Postol of MIT, has concluded that the alleged device for a sarin attack could not have been delivered from the air but only from the ground, meaning that the chemical attack may not have been the result of the Syrian airstrike.

The Trump administration is pushing the accusation that the Assad regime was the force that carried out the highly lethal chemical attack on April 4 very hard, perhaps not so much to justify the already politically popular US strike against the Shayrat airbase on April 6, but rather to buttress a new hardline policy against the Syrian regime.

The two unnamed senior Trump officials who briefed journalists Tuesday sought to discredit the Russian claim that the Syrian airstrike had hit a warehouse in Khan Sheikhoun that was believed to hold weapons including toxic chemicals. One of the two unnamed officials said that a Syrian military source had "told Russian state media on April 4 that regime forces had not carried out any strike in Khan Sheikhoun, which contradicted Russia's claim directly."

This Trump administration official appeared to be suggesting that there was no evidence that a weapons storage site had been hit by a Syrian airstrike. But an internal administration paper on the issue now circulating in Washington, a copy of which Truthout obtained, clearly refers to "a regime airstrike on a terrorist ammunition dump in the eastern suburbs of Khan Sheikhoun."

More importantly, the US military allegedly knew in advance that the strike was coming: Russian military officers informed their American counterparts of the Syrian military's plan to strike the warehouse in Khan Sheikhoun city 24 hours before the planned airstrike, according to the former US official who spoke with Truthout. The official is in direct contact with a US military intelligence officer with access to information about the US-Russian communications. The military intelligence officer reported to his associate that the Russians provided the information about the strike to the Americans through the normal US-Russian Syria deconfliction telephone line, which was established after the Russian intervention in 2015 to prevent any accidental clash between the two powers. The officer said that Russia communicated to the US the fact that the Syrians believed that the warehouse held toxic chemicals.

That information was considered so politically sensitive that after its initial dissemination, it was available only to a few officials, the US military intelligence officer told his associate.

Despite the US denial of the Russian account of a Syrian strike on a warehouse in the city, an eyewitness account appears to confirm it. A 14-year-old resident told The New York Times she was walking only a few dozen yards away from a one-story building when she saw a plane drop a bomb on it.  The eyewitness reported the explosion created a "mushroom cloud" that stung her eyes.

She added that she then hurried back home and watched as people began to arrive to help others in the neighborhood and were stricken by the toxic chemical in the air.

The airstrike she saw appears to be the one that was the objective of the Syrian operation in Khan Sheikhoun. The mushroom cloud she saw seems to be the widest of the three mushroom clouds shown in a video taken sometime after the explosion.

Two other strikes were apparently carried out after the initial strike on the building for which there is an eyewitness account. One was at a hospital in or near the city and the other was at a center of the White Helmets organization, built into a rock formation. The hospital strike was reported in an Associated Press story on Tuesday, which reported that a Russian drone was said to be hovering over a hospital as victims of the earlier attack were being brought in for treatment. The story said the hospital was later attacked.

The hospital attack was cited by an anonymous AP source as evidence that the Russians knew in advance that a chemical weapons attack was going to be carried out. In fact it indicates that the hospital strike may well have been linked to the earlier airstrike on the one-story building.

When asked about the bombing at the hospital during the press briefing on Tuesday, one of the unnamed senior US officials would not confirm that the Syrians had carried out the attack or discuss the issue further, saying, "We don't have any comment right now on who may have been involved in bombing that hospital and why and how."

The senior US officials briefing the press insisted that a Syrian air strike delivering sarin was the only credible explanation for the dozens of deaths in Khan Sheikhoun. One of the officials cited a video showing a crater in the middle of a main road, which the Trump administration's key officials have determined was the site of the chemical weapon that reportedly killed 50 to 100 people. He implied that this was evidence that a Syrian airstrike had released what was believed to be sarin.

But Dr. Theodore Postol of MIT, who debunked the original official claims of the location of rockets that hit Syria's Ghouta area with what appeared to be sarin on August 21, 2013, has come to a different conclusion. Postol says that the carcass of the delivery vehicle -- shown in last week's video and in still photos of the small crater -- indicates that the chemical attack was not delivered via airstrike but from the spot on the road where it was found.

In an assessment completed on Tuesday, Postol called the collapsed metal tube shown in the crater, which he estimates to be about two and a half feet long, "an improvised dispersal device." He analyzes the device as having been assembled from a section of pipe from a 122 mm rocket with caps at both ends that was filled with sarin and with some kind of explosive placed on top of it. The explosive on top smashed in the pipe holding the sarin, and pushed the sarin out of its tube, according to Postol, "like toothpaste from a toothpaste tube."

Postol estimates that the device might have held eight to 10 liters of sarin. Was it actually used to emit the toxic chemical that killed dozens of residents? Postol doesn't claim to know, but he states that it did not resemble an air-delivered chemical weapon. "The administration attempted to use evidence that contradicted their own claim," Postol told Truthout.

One of the unnamed US officials briefing the press declared, "We are confident that terrorists or non-state actors did not commit this particular attack," and explained that non-state actors don't have the sarin required. But whether that assumption is well-founded or not, the universal assumption that the deaths could only have been caused by exposure to sarin is mistaken. Exposure to smoke munitions that create phosphine gas when in contact with moisture can cause neurological symptoms that mimic those of sarin, because they both damage the body's ability to produce the enzyme cholinesterase.

Both the Syrian Army and the Al-Nusra Front fighters in the Aleppo area, moreover, had abundant stocks of phosphine-producing smoke munitions in 2013, as was documented by German journalist Alfred Hackensberger of Die Welt. Furthermore, both ISIS (also known as Daesh) and al-Qaeda in Aleppo have been reported to have access to phosphine-based weapons.

These phosphine-producing munitions can be lethal if humans are exposed in confined space, and they have the smell of garlic or rotting food. That is precisely the smell that was reported by eyewitnesses in Khan Seikhoun. Sarin, on the other hand, is normally odorless.

Gareth Porter is an independent investigative journalist and historian writing on US national security policy. His latest book, Manufactured Crisis: The Untold Story of the Iran Nuclear Scare, was published in February of 2014. Follow him on Twitter: @GarethPorter. 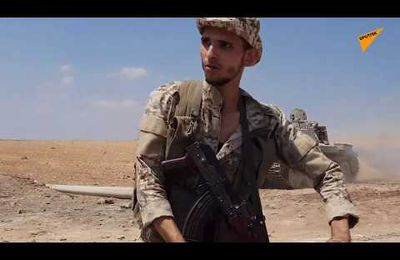