The email account of one of Washington’s most connected and influential foreign operatives has been hacked. A small tranche of those emails was sent this week to media outlets, including The Intercept, HuffPost and The Daily Beast, with the hacker promising to release a trove publicly.

The hotmail account belongs to the UAE’s ambassador to the United States, Yousef Al-Otaiba, and The Intercept can confirm it is the one he used for most Washington business. HuffPost confirmed at least one of the emails as authentic and the UAE has confirmed that Otaiba’s account was indeed hacked.

Otaiba’s influence derives largely from his pocketbook, as the ambassador is well known for throwing lavish dinner parties, galas, and hosting powerful figures on extravagant trips. Several Christmases ago, he sent out iPads as gifts to journalists and other Washington power players as gifts. There’s no telling what kind of messages might reside in that inbox.

The hackers used a .ru email address, associated with Russia, and referred to themselves as GlobalLeaks, tying themselves to DCLeaks, a website that previously released Democratic emails. The intelligence community has said DCLeaks is a Russian-operated website, which means that the Otaiba hackers are either connected with Russia or trying to give the impression that they are.

Russia and the Gulf monarchies, client states of the United States, are longtime rivals, backing opposing sides in Syria and clashing for decades over Iran.

The emails provided so far to the The Intercept show a growing relationship between the United Arab Emirates and the pro-Israel, neoconservative think tank called the Foundation for Defense of Democracies (FDD).

On the surface, the alliance should be surprising, as the UAE does not even recognize Israel. But the two countries have worked together in the past against their common adversary, Iran.

On March 10 of this year, FDD CEO Mark Dubowitz authored an email to both the UAE’s ambassador to the United States, Yousef Al-Otaiba, and FDD Senior Counselor John Hannah — a former deputy national security adviser to Vice President Dick Cheney — with the subject line “Target list of companies investing in Iran, UAE and Saudi Arabia.”

“Dear, Mr. Ambassador,” Dubowitz wrote. “The attached memorandum details companies listed by country which are doing business with Iran and also have business with the UAE and Saudi Arabia. This is a target list for putting these companies to a choice, as we have discussed.”

Dubowitz’s attached memorandum includes a lengthy list of “non-U.S. businesses with operations in Saudi Arabia or UAE that are looking to invest in Iran.”

The list includes a number of major international firms, including France’s Airbus and Russia’s Lukoil.

Presumably, the companies are being identified so that the UAE and Saudi Arabia can pressure them over investing in Iran, which is seeing an expansion of foreign investment following the 2015 nuclear deal.

Israel and the Gulf monarchies have grown closer in recent years, as both sides fear that Iran is moving closer to normalization with the West and will therefore increase its own influence and power in the region. But admissions of the alliance between the two are still rare in public. One high-level Israeli official, discussing the relationship on background for a previous HuffPost profile of Otaiba, laid out the politics of it. “Israel and the Arabs standing together is the ultimate ace in the hole. Because it takes it out of the politics and the ideology. When Israel and the Arab states are standing together, it’s powerful,” he said.

The hacked emails demonstrate a remarkable level of backchannel cooperation between a leading neoconservative think tank — FDD is funded by pro-Israel billionaire Sheldon Adelson, an ally of Israeli Prime Minister Benjamin Netanyahu who is one of the largest political donors in the United States  — and a Gulf monarchy.

Hannah and Otaiba are frequently chummy in the exchanges. On August 16 of last year, Hannah sent Otaiba an article claiming that the UAE and FDD were both responsible for the brief military coup in Turkey. “Honored that we’re in your company,” Hannah wrote to Otaiba.

In another email exchange in late April of this year, Hannah complains to Otaiba that Qatar — a rival Gulf government that has clashed with the UAE in recent months over various issues — is hosting a meeting of Hamas at an Emirati-owned hotel. Otaiba responds that it’s not the Emirati government’s fault, and that the real issue is the U.S. military base in Qatar, “How’s this, you move the base then we’ll move the hotel :-).”

The emails detail the proposed agenda of an upcoming meeting between FDD and UAE government officials that is scheduled for June 11-14. Dubowitz and Hannah are listed as attending, as well as Jonathan Schanzer, FDD vice president for research. UAE officials requested for meetings include Sheikh Mohammed bin Zayed, the crown prince who commands the armed forces.

The agenda includes extensive discussion between the two on Qatar. They are scheduled to discuss, for instance, “Al Jazeera as an instrument of regional instability.” (Al Jazeera is based in Qatar.)

There is also “discussion of possible U.S./UAE policies to positively impact Iranian internal situation”; included among the list of policies are “political, economic, military, intelligence, and cyber tools,” which are also brought up as a possible response to “contain and defeat Iranian aggression.”

FDD has been involved in shaping Mideast policy debate during the Trump administration, so it is likely that the UAE views it as an important conduit to pressure Trump to adopt its more hawkish line on Iran. David Weinberg, a senior fellow at the organization, was quoted last month as saying that the UAE is “ecstatic” about the Trump administration’s approach to the region.

“They have been looking for some time for an American partner to push-back against Iran,” he told Arabianbusiness.com. “They are looking for America to turn rhetoric into action.”

Otaiba has also developed a close relationship with President Trump’s son-in-law and adviser Jared Kushner. The two first met last June at the behest of Thomas Barrack, a billionaire investor and Trump backer. A Politico article last February described Kushner as “in almost constant phone and email contact” with the ambassador.

Whatever the UAE’s agenda, it isn’t promoting democracy. From the previous profile:

As protests spread in Egypt, Otaiba pushed the White House hard to support Mubarak, without success. After the Muslim Brotherhood came to power in a democratic election, he filled the inbox of Phil Gordon, the White House’s top Middle East adviser, with missives savaging the Brotherhood and its backers in Qatar. (Gordon declined to comment.) “He’d robo-email people,” says the former White House aide. “You can be sure when Yousef has something to say on a topic like that, high-level people throughout the State Department and in the White House are going to hear it, in very similar if not identical emails.”

We’re now getting a sense of what those emails looked like. In an email sent on July 3, 2013, shortly after the Egyptian military deposed elected Muslim Brotherhood-backed president Mohamed Morsi, Otaiba lobbied former Bush administration officials Stephen Hadley — now a consultant at RiceHadleyGates — and Joshua Bolten on his view on Egypt and the wider Arab Spring.

“Countries like Jordan and UAE are the ‘last men standing’ in the moderate camp. The arab spring has increased extremism at the expense of moderation and tolerance,” he lamented.

He described Morsi’s overthrow in glowing tones. “Today’s situation in Egypt is a second revolution. There more people on the streets today than January of 2011. This is not a coup, this is revolution 2.0. A coup is when the military imposes its will on people by force. Today, the military is RESPONDING to people’s wishes.”

Egypt today is a virtual dictatorship. And a close ally of both the U.S. and the UAE.

Update: June 3, 2017
This piece was updated to clarify the relationship between Russia and Iran. 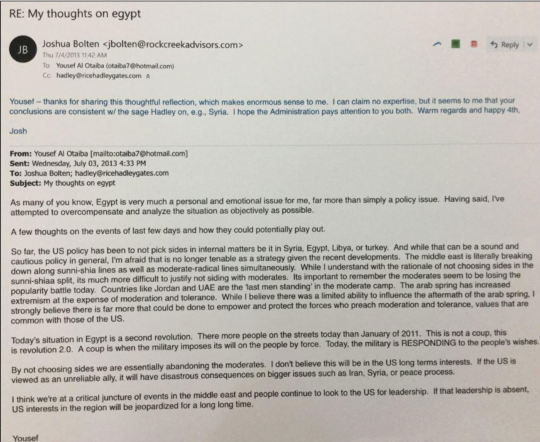 Top photo: A picture taken in downtown Dubai on May 31, 2017, shows Burj Khalifa and the Dubai skyline.